What is the Laravel Developer Scope? Why is it Considered as the Future of Web Application Development?

The advent of web development technologies is not going to slow down anytime soon. Whether it’s the blockchain technology or IoT, PWAs, responsive web applications, cybersecurity, push notifications, Voice Search Optimization, AR/VR, AI/ML, Single-page applications, javascript frameworks such as Angular, Node js, PHP frameworks such as Laravel, Symfony, CakePHP, etc, no matter what the situation is, one has to keep up with these web development trends or he may have a lot to lose.

Web development frameworks have been the foundation of any successful development project. Among which Laravel technology turns out to be an ideal choice for developing web applications as well as websites. The following post focuses on what is the scope of Laravel developers in India in future. 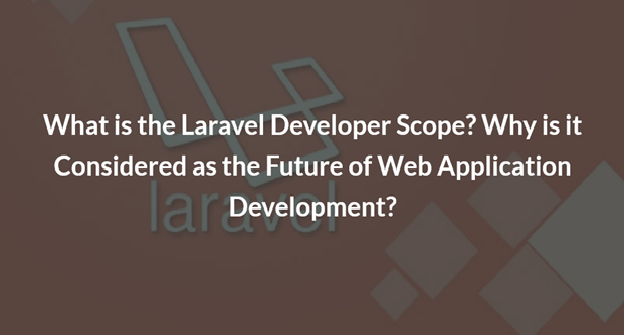 All About the Laravel Framework

Mainly used to develop custom applications, the Laravel framework is open-source in nature and successfully runs on PHP. Of course, this is certainly not it! Laravel development offers several advantages over other web application frameworks such as React, Vue and Angular, say for example – it offers better routing, template HTML, and precise authentication.

Though entirely being server-side, Laravel development also features a model view controller that makes everything right. So if you want to create a lightweight template or perform bcrypt hashing, enhance overall performance, conduct seamless unit testing, laravel technology is the right choice to take into account. Further, I would like to mention certain benefits of using laravel for your upcoming web application development project.

One of the obvious advantages offered by the PHP framework is that it is pretty simple and easy to use. So here PHP developers do not have to worry about how they are going to succeed as here all they have to do is consider using the built-in templates. And creating a 5-7 page website is possible for them within a day or two.

With the severe increase in cybersecurity threats, it has become mandatory for businesses to consider only those PHP frameworks which are best in regards to security. And laravel is created in such a way that it not just protects against SQL injection but also cross-site scripting and request forgery. In case of any such cross-scripting request forgery, the token method is used to protect the application. Any forget request can be identified without much hassle with the help of a CSRF filter.

It may quite interest you to know that it is possible to secure the Laravel APIs, using AuthO. Just you need to set it upright and configure the authentication driver. Other than SQL injection, the Laravel framework does offer protection against cookies.

In fact, there are so many websites built using Laravel. This means it’s a tried and tested method, so you can never go wrong!

Another advantage of considering Laravel to develop web applications is that it works absolute wonders when it comes to performance. Now what happens is businesses especially non-techies end up including tons and tons of features in the development and this significantly results in lower site performance. Laravel itself comprises a wide range of tools like Memcached and Redis to enhance the performance of the developed product.

So whether you include tons of features or not, it is guaranteed that your web application will turn out to be the best when it comes to performance.

Of course, when you develop a website, it is very imperative not to integrate third-party integration. So for seamless third-party integration, Laravel development with its clean APIs turns out to be an ideal choice.
So it doesn’t matter whether your website requires Paypal or Stripe or any other automated tool as the Laravel framework takes care of everything here.

Of course, developers irrespective of their expertise know what Laravel Artisan CLI is. And for those who don’t know it is a command-line interface that aids developers to conduct processes seamlessly. Right from migrating data to creating basic code, models, etc everything else becomes way easier.

Above all with the help of such CLI, developers can free themselves from all those monotonous and tedious manual efforts as everything here becomes automated. Yes, this also includes the creation of MVC files.

Here developers are required to work with tons and tons of databases which is definitely not an easy thing to do. Eloquent ORM is one such feature offered by Laravel that assists in conducting simple interaction between the architecture and the database of the particular web application. Unlike others, here Laravel doesn’t use any SQL code instead PHP syntax is being used.

Last but certainly not least, the blade template engine offered by Laravel enables developers to work with textual data. So to conduct successful development, developers can connect data models and process the app’s code seamlessly.

Here the data can be processed within its layouts without any impact on the app’s performance and speed.

Today around 170000 sites are developed using Laravel as the framework and the numbers won’t be slowing down any time soon. In fact businesses irrespective of their size and verticals whether it’s finance or education or travel or entertainment, laravel websites are seen popping up everywhere. With the help of the framework, developers can build:

Overall, the future is extremely bright! As a developer, Laravel could be your sure shot career choice. It’s worth giving it a shot and I assure that you won’t have any regrets. So that’s all for now! In case you still have any doubts or queries regarding Laravel development, feel free to mention that in the comment section below.